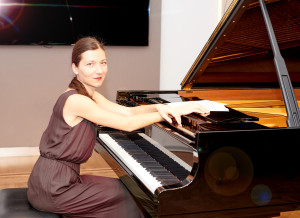 Medtner Sonata Reminiscenza Op. 38, No. 1 in A minor
Medtner Tragic Sonata in c minor op.39 No.5 in C minor

Natalia Sukharevich was born in Moscow. She started her piano education as a concert pianist at the music college of Moscow Tchaikovsky Conservatoire (class of famous teacher Y. Batuev). At the age of 14 Natalia performed Mozart’s A dur Concerto(N.23) with Symphony Orchestra of the Ministry of Defense of Russian Federation.

In 1999 she was enrolled in the Moscow P. I. Tchaikovsky Conservatory(Class of professor V.Kastelsky).In 2001 she continued her studies in Moscow conservatoire in class of Peoples Artist of Russia , professor A.Nasedkin, the outstanding pianist, teacher and composer .
She studied chamber music in class of professors T. Gaidamovich and A.Bonduryanskiy.
In 2004 she graduated from the conservatory with Diploma of Honours under Professor A. Nasedkin,
From 2004 to 2007 she continued her studies at a post-graduate course in the Moscow State Conservatory with the same teacher.
From 2006 to 2008 she had a “Virtuosismo course” in “Accademia internazionale di Musica in Roma” (Art’s Academy in Rome) and from 2010 to 2017 high course “Corso di perfezionamento” in “Accademia Musicale Santa Cecilia di Bergamo” with the famous pianist and teacher K.Bogino.

In 2009 she recorded a Master CD(Soundfactory Sonicview), produced by Arts Academy in Rome, with program that includes works by Haydn, Schumann, Chopin, Rakhmaninov.
She was chosen to record a promotional CD for Accademia Perosi in Biella, Italy, in 2010.
In 2015 the Musical Association “Campus delle Arti” awarded Natalia by CD recording at the Sala Trafalgar di Franco Bixio in Rome.

Her diverse repertoire embraces a wide range of styles and trends, from barocco to contemporary music. She has numerous different solo programs, including four ballades by Chopin, many concertos for the piano and orchestra and lots of chamber music as well.