In the summer of 2022, a small international piano festival, the Albu Piano Camp, will take place in the Albu Manor for the first time. The tradition of organizing music camps in Albu, Estonia, is already ten years old this summer; and from these music camps has emerged the idea to invite to Albu the well-known pianist-couple from the prestigious Sibelius Academy in Finland, Hui-Ying and Erik T. Tawaststjerna. Their participation at the Albu festival aims to bring together high-level pianists from Estonia and abroad. Their course also welcomes the participation of chamber music groups: piano duos, trios, etc. Masterclasses and concerts will take place in the Albu manor. Participants will be given the opportunity to perform also in other manors around Estonia, in the festival “Mõisamängud” on the 30th and 31st of July and gain experience in teaching as assistants in Childrens Music Camp. 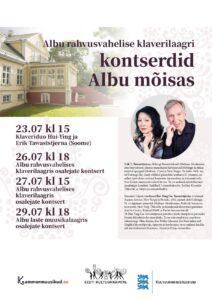 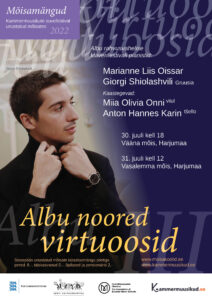 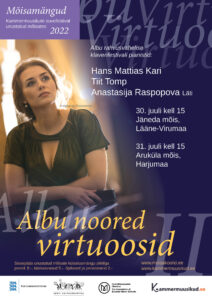 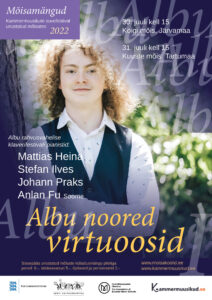 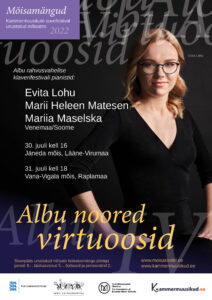 Erik T. Tawaststjerna (“Ta-va-sher-na”) is Professor Emeritus at the Sibelius Academy of the University of the Arts Helsinki. He began his musical education in Helsinki and then continued his studies in Moscow, Vienna, and New York. He participated in master classes given by Wilhelm Kempff and Dmitri Bashkirov. He won the second prize at the Helsinki Maj Lind National Piano Competition in 1968 and has since given concerts around the world. He has appeared as a soloist with major orchestras in Finland, performing such works as Rachmaninoff’s Concerto no. 3 and Leonard Bernstein’s Age of Anxiety. Mr. Tawaststjerna has made numerous recordings, among them the four Ballades of Chopin and a series of 8 recordings of the complete piano music of Jean Sibelius. Many of his students have received top prizes in international piano competitions. Mr. Tawaststjerna has been on the juries of several competitions, such as the Van Cliburn Competition in Fort Worth, the Maria Canals Competition in Barcelona, the International Beethoven Competition in Vienna, and the London International Piano Competition. He has given master classes, among other places, at the Guildhall School of Music in London, the University of the Arts in Berlin, and the Tokyo College of Music. In 2006 he was named ‘Professor of the Year’ by the Finnish Professors’ League.

Dr. Hui-Ying Liu-Tawaststjerna is highly regarded as one of Finland’s finest classical musicians of this day. Her music background includes academic studies at the Sibelius Academy, the Peabody Conservatory of Music, New York University; and piano studies with Martin Canin, Konrad Wolff, and Pierre Sancan. She had also attended masterclasses given by Leon Fleisher, Karl Ülrich Schnabel, and Rosa Sabater. Her official American debut occurred in New York’s Carnegie Hall, as a winner of the Artist’s International Management’s auditions. She has performed under the baton of Okko Kamu, Esa-Pekka Salonen, Eri Klas; and she has collaborated with esteemed instrumentalists such as Jean-Jacque Kantorow, Steven Isserlis, Patrick Gallois, Marko Ylönen, Kaija Saarikettu, Raimo Sariola, among others. As a passionate piano teacher, lecturer and educator, she has given master classes extensively at music institutions in Europe, Asia and North America, including the Guildhall School of Music in London, the Royal Northern College of Music in Manchester, the Hanns Eisler Music University in Berlin, the Music University Freiburg, and NYU Steinhardt in New York City, to name only a few. Many of her former students have won top prizes in national and international piano competitions; and they are presently well-known performers or teachers in their own rights and living in different corners of the world. She has co-authored a highly popular piano method, ‘Piano Avain’ (‘Piano Key’). As the President of the Chopin Society of Finland since 2006, she has created the ‘The MusicPlus’ concert series, as well as The National Young Chopin Festival. She is also one of the principal founders of the Nordic and Baltic Crossing Keyboards exchange project. Born in Taipei, Taiwan, Hui-Ying had lived in Buenos Aires, New York, and Paris, before making her home permanently in Helsinki since 1982.

There are grand pianos and uprights available for practice at Albu manor, Albu Rahvamaja and Albu Noortekeskus.

Deadline: 20.06.2022
To participate in Albu Piano Camp, fill in Albu registration form and send it to: kammermuusikud@gmail.com
Please note: invoice willhttp://kammermuusikud.ee/wp-content/uploads/2022/06/Albu-registration-form.docx be sent to you after your registration has been received and approved.

By train: (every hour, all day till late night)

Go to web page and look up the timetable and right train (on the timetable there is written the number and final destination of the train): https://elron.ee/en

– if arriving in Tallinn by boat: go from the train stop “Tallinn” (in the main railway station “Balti Jaam”, 2 km from the harbour) to “Aegviidu”. Tickets (3-4 Euros) can be purchased on the train by bank card

– if arriving in Tallinn by plane: go from the train station “Ülemiste” (850 m from airport) to “Aegviidu”. Tickets (3-4 Euros) can be purchased on the train by bank card

We can pick you up by car from from Aegviidu, which is ca 20 km away from Albu